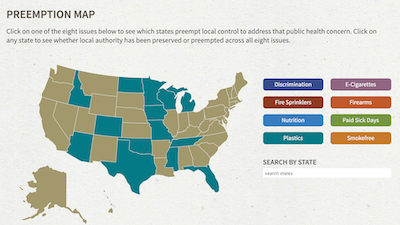 Today, many of America’s cities, towns, and counties have less power than they did at the start of the year to protect the health and safety of their communities or to respond to the unique needs and values of their residents. That’s because between January and June 2019, state legislatures across the nation continued a troubling trend of passing more laws forbidding or “preempting” local control over a large and growing set of public health, economic, environmental, and social justice policy solutions.

Without most of the nation noticing, the beverage industry has found a way to snuff out local sugar taxes—by squashing them at the state level.

See the complicated landscape of plastic bans in the U.S.
National Geographic, 8/15/2019

“The plastic industry is putting a lot of their money on preemption, and they’re winning,” says Jennie Romer, an attorney at the Surfrider Foundation, a group that advocates for pro-environment policies…

Proving once again that ignorance is no bar to publication in the U.S. legacy press, former executive editor of the New York Times Howell Raines has offered his inane take on the current gun control debate in a piece for the Washington Post…

However, were Raines’ proposal to be carried out, there would be some ways in which firearms laws would be more restrictive.

In 1960 gun-owners did not enjoy the strong state firearms preemption laws that they do today. Old versions of ATF's State Laws and Published Ordinances are replete with all manner of local registration, may-issue licensing, permit to purchase, and carry ordinances that have been wiped off the books by state preemption laws.

The same goes for the Right-to-Carry. The Right-to-Carry revolution did not start until 1987, when Florida passed its landmark legislation. Prior to 1987, there were 9 Right-to-Carry states. Today there are 42. Before this sea change, many Americans could only lawfully exercise their Right-to-Carry at the discretion of a government official. [Emphasis added]

"We are the second biggest city in the country. When the state legislators want to do something in this city, they should talk to us before they make proposals so we can be engaged, so I will be supporting Mr. Koretz because I think it's important that our colleagues in Sacramento respect this council," Council President Herb Wesson said.

"Fresno had very high rates of heart disease. If we look at the congressional districts, we're 10 out of 80, and 13 our of 80 for heart disease," says Chris Madsen, a professor at the Berkeley School of Health.

By implementing that tax in Fresno, organizers say it would raise about $7 million…

Morales says there are coalitions trying to repeal that preemption. [Emphasis added]

DENVER Colorado regulators have signed an agreement with the state’s most productive oil and gas county to coordinate their drilling rules.

The state Oil and Gas Conservation Commission on Wednesday released the text of the agreement, outlining deadlines for drilling permits in unincorporated parts of Weld County.

The agreement is aimed at avoiding conflicts between the industry-friendly county and state regulators who are bound by a new law to put public health and safety ahead of energy production.

The law also gives local governments new regulatory powers, which prompted Weld County to write its own rules and claim that the county, not the state, had authority over well locations. [Emphasis added]

Despite the unfortunate distinction of having some of the most devastating mass shootings in the nation, Florida remains a fairly gun-friendly place. A state law passed in 2011 actually prohibits local governments from passing restrictions on firearms that are stricter than what's allowed at the state level. Local officials who flout that law can be thrown out of office and personally fined up to $5,000 — a punishment that's being challenged in court.

Appeals court agrees to speed up gun case
The News Service of Florida, 8/28/2019

TALLAHASSEE, Fla. – The 1st District Court of Appeal agreed Wednesday to speed up consideration of a high-profile battle over a state law that has threatened tough penalties for local officials and governments that approve gun regulations.

Don’t show up to a gun fight armed with plastic bags unless, that is, you’re bracing to do battle over state preemption in the Florida Legislature.

Democrats have pre-filed two 2020 bills seeking to impose home rule over gun laws and in the regulation of plastic shopping bags and foam containers.

Senate Bill 134, Sen. Annette Taddeo, D-Miami, would repeal a 1987 preemption law prohibiting local governments from adopting gun regulations more restrictive than the state’s. It has not been assigned a committee.

Editorial: A fee on single-use plastic bags has been found to be an effective way to reduce their use that also generates money for environmental initiatives.
The Gainesville Sun, 8/25/2019

Cities are stymied in banning plastics — and the state is doing nothing about it, they say
Miami Herald, 8/22/2019

The municipalities aren’t changing their minds on the need to reduce plastic waste; they’re walking back policy to avoid a legal battle. They have each received letters from the Florida Retail Federation, the lobbying group representing retail giants Walmart, Target and Publix, among others, alleging the bans violate state law and threatening to sue the local governments.  [Emphasis added]

In 2015, following concerns over frac-sand mining, the supervisors made an ordinance that prohibits subsurface mining. Winneshiek County Supervisor Dean Thompson was heavily involved in the research behind the ordinance and brought the proposal to hire the law students for the mining study to the rest of the board…

While he believes Winneshiek County is in “good shape” with its ordinance, he acknowledged any ordinance can be challenged. In addition, he noted the state bars counties from regulating confined animal feeding operations (CAFOs), removing any local control over those industrial operations. County governments fear the state could do the same with mining, he said.  [Emphasis added]

GOP policymakers have supported the statewide regulation of commercial animal feeding operations, or CAFOs, in siting decisions and in setting a minimum wage. They fear allowing local decisions would create a hodgepodge of rules among counties.

Nathaniel Rateliff, The Avett Brother, and Kool & The Gang. A star-studded line-up for the 2019 Festival at Sandpoint.

It drew big names this year, but now is threatened, in danger of moving, or even cancellation.

In a letter sent to KHQ, outside counsel representing the Bonner County Commissioners and others demand the Sandpoint city attorney to reconsider its ban on firearms and refrain from enforcing a private party's ban on public property.

THE LEGISLATURE’S PUBLIC SAFETY COMMITTEE will hear public testimony on firearms bills on Wednesday. In roughly equal numbers, the 68 bills before the Committee would either tighten gun control in the state or loosen it.

One of the bills proposing to loosen gun control, House 2122, would prohibit cities and towns from enacting or enforcing “any law, ordinance or regulation concerning the lawful ownership, use, possession, transfer, purchase, receipt or transportation of weapons.”

Local activists have joined a lawsuit to halt Senate Bill 391.

It’s being called a blow for Missouri farmers. Earlier this week, a law was blocked that would have shielded livestock farms from stringent local health rules…

Critics of this law say it’s unconstitutional and infringes on local control. Critics of concentrated animal feeding operations oppose the bill saying they worry about water quality and odors.

Editorial: Parson should let mega-hog-farm law die. It's the conservative thing to do.
St. Louis Post-Dispatch, 8/23/2019

A new Missouri law that prevents counties from setting their own standards for incoming industrial-level livestock operations — mega-hog-farms and the like — is appropriately under legal attack from both environmentalists and county governments.

The thing that really rankles town officials, though, is the authority that state law and the Federal Communications Commission — and therefore, the proposed ordinance — are giving telecom companies to basically install their equipment where and when they want, with little input from the town. Aiman-Smith’s ordinance gives the town as much control as seems possible under state and federal law — but that isn’t much.

Philly soda tax: Here’s how much money it has raised, and how it’s been spent
The Philadelphia Inquirer, 8/21/2019

But opposition from the beverage industry is not expected to end, especially as other cities consider or implement taxes on soda. Philadelphia was the first major U.S. city to pass a tax on soda, and other cities are watching how it plays out…

The tax also faces challenges from Harrisburg, where a bill introduced in the state legislature this spring would preempt and eliminate the city’s tax. A similar measure failed to gain enough support to pass last year. The current bill is being pushed by Wakefern Food Corp., a retailer-owned cooperative of grocery stores that includes Jeff Brown’s ShopRite and Fresh Grocer Stores in Philadelphia.

Cities that have delayed or rejected the technology are hoping they can get around a federal law that preempts local control regarding some elements of telecommunications, including radio frequencies. So far, there have been no legal challenges to local 5G bans, however.

Mayor Sylvester Turner on Wednesday said he wants state lawmakers to give cities and counties more flexibility to address gun violence in response to mass shootings this month that killed 31 people, including 22 in El Paso…

Plastic bags are killing horses and cows across the state
Stephenville Empire-Tribune, 8/14/2019

Last year, the Texas Supreme Court struck down the city of Laredo’s plastic bag ban, effectively ending about a dozen similar policies in other Texas municipalities…

In its ruling, the court said that single-use bags are considered garbage and fall under the state’s solid waste disposal law, which preempts municipal ordinances.  [Emphasis added]

The Texas Legislature Passed Ten Bills Protecting Your Second Amendment Rights During the 2019 Session. These Measures All Take Effect on September 1.
NRA-ILA, 8/29/2019

House Bill 3231 improves and modernizes Texas’ firearms preemption law, specifically with regard to zoning authority that could be otherwise be used by cities and counties to circumvent state law and regulate the sale or transfer of firearms and ammunition at the local level.

Opinions Vary On How Large Wisconsin Livestock Operations Should Be Regulated
WUWM.com, 8/23/2019

Green County resident Bethany Storm thinks the law should rely on local expertise, instead of treating Wisconsin’s varied landscape with one-size-fits-all regulations. "My local county land and water conservation staff know the landscape in Green County," she said. "They know that 95% of my town sits on karst rock over very little topsoil. They know that barnyards that were built straddling our trout streams have caused problems in the past. Wisconsin needs local control back." [Emphasis added]