Without most of the nation noticing, the beverage industry has found a way to snuff out local sugar taxes—by squashing them at the state level.

Pennsylvania has found itself the latest battleground for a national strategy by soda producers aimed at stopping local taxes on their products—not by fighting the cities directly, but by pushing pliant state legislatures to ban any such tax increases statewide. Called “preemption” laws, they’re designed to limit cities from imposing taxes of their own. Legislatures in Arizona and Michigan have already passed state laws forbidding local soda taxes. In Washington state, the industry backed a voter initiative barring local soda taxes; it passed in 2018.

Iowa passed a right to farm law in 1995 that similarly limits local regulation of CAFOs, backed by that state’s own powerful pork industry, and comparable laws have swept through many other farm states in the decades since. [Emphasis added] 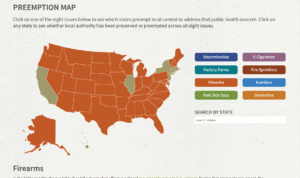 See the complicated landscape of plastic bans in the U.S.
National Geographic, 8/15/2019

“The plastic industry is putting a lot of their money on preemption, and they’re winning,” says Jennie Romer, an attorney at the Surfrider Foundation, a group that advocates for pro-environment policies…

She also points to significant involvement from the American Legislative Exchange Council (ALEC) a right-leaning policy group that provides model legislation to states adopting plastic preemptions. Both the American Plastics Council and the Plastics Industry Association have been members of ALEC.

Large plastic packaging maker Berry Global Group Inc. is coming out against campaigns by its plastics industry peers for state laws that take away the power of local governments to ban or tax packaging.

Passing those laws has been an important political priority for plastic bag makers in particular, along with retail stores and restaurants. But it’s come with blowback: Coke and Pepsi, for example, recently left the Plastics Industry Association after Greenpeace pressured them over the issue…

In a nuanced Aug. 21 statement, the company said it opposed bans on plastic products but also said it did not want to support laws it sees as taking away a city’s ability to make its own decisions.

With an extensive plastics background, Radoszewski will be a strong industry advocate
Plastics News, 8/6/2019

Environmentalists want cities and counties to be able to ban single-use plastic products like grocery bags, straws and polystyrene takeout containers. It is hard for the industry to fight all those local bans, so the American Progressive Bag Alliance, a self-funded group within the Plastics Industry Association, has been fighting back by getting industry-friendly state legislatures to pass laws making local bans illegal.

Cities and towns are used to big confrontations over installing cellphone towers, but the 5G controversies will be different. The towers we use now, for the 4G system connecting our mobile phones, can send signals for miles. The 5G signals can provide much faster speeds and much larger capacity, but they travel just hundreds of feet. They can use much smaller “towers,” some the size of a backpack. But 5G will need many, many more of them, perhaps a million new mini-towers altogether.

Senate Bill 134, Sen. Annette Taddeo, D-Miami, would repeal a 1987 preemption law prohibiting local governments from adopting gun regulations more restrictive than the state’s. It has not been assigned a committee.

Editorial: A fee on single-use plastic bags has been found to be an effective way to reduce their use that also generates money for environmental initiatives.
The Gainesville Sun, 8/25/2019

Florida’s 3rd District Court of Appeal ruled Aug. 14 that state law preempts local governments from banning retailers and restaurants from giving out single-use plastic bags and Styrofoam containers. The Gainesville City Commission subsequently voted to rescind its ban, while the Alachua County Commission previously revoked its ban after a lawsuit threat from the Florida Retail Federation.

Cities are stymied in banning plastics — and the state is doing nothing about it, they say
Miami Herald, 8/22/2019

The municipalities aren’t changing their minds on the need to reduce plastic waste; they’re walking back policy to avoid a legal battle. They have each received letters from the Florida Retail Federation, the lobbying group representing retail giants Walmart, Target and Publix, among others, alleging the bans violate state law and threatening to sue the local governments.  [Emphasis added]

The Florida law preempted “the whole field of regulation of firearms and ammunition,” meaning municipalities and counties could not pass gun regulations.  Unfortunately, such a preemption provision is not unusual, but in 2011, the Florida legislature took it a step further by adding substantial penalties for violating the preemption.  Under the law, if a municipality enacts a gun law later found preempted, it is subject to a private damages lawsuit with liability up to $100,000, plus uncapped attorneys’ fees, and the legislators who voted for the preempted law are subject to a $5,000 fine and removal from office by the governor…

In a 15-page decision, a Florida Circuit court judge declared the law unconstitutional, ruling that it violated both legislative immunity and government function immunity.

“They had told me the flags went up in their property in the right-of-way, right in front of their property and that was their first notification that poles were going up,” said Herron.

His neighbor didn’t have any choice, and neither did the city.

That law bars local officials from approving stricter gun control measures than the state has authorized. In 2011, state lawmakers added penalties — including fines and removal from office — for local officials who violated the preemption.

The preemption itself — which was approved in 1987 — still stands. But a Leon County-based circuit judge struck down the penalties in a late July ruling.

The Law Offices of Katz & Phillips, P.A., and Kingry and Friday, P.A. have filed a class action lawsuit today [docket number 37-2019-CA-001973] on behalf of Florida Carry against the Florida Department of Law Enforcement (FDLE) for its ongoing violations of Florida’s firearm background check and preemption laws. The lawsuit was filed on behalf of all holders of Concealed Weapon or Firearm Licenses (CWFL) and Law Enforcement Officers who have purchased a firearm in the past four years.

Local activists have joined a lawsuit to halt Senate Bill 391.

It’s being called a blow for Missouri farmers. Earlier this week, a law was blocked that would have shielded livestock farms from stringent local health rules…

Critics of this law say it’s unconstitutional and infringes on local control. Critics of concentrated animal feeding operations oppose the bill saying they worry about water quality and odors.

A new Missouri law that prevents counties from setting their own standards for incoming industrial-level livestock operations — mega-hog-farms and the like — is appropriately under legal attack from both environmentalists and county governments.

The thing that really rankles town officials, though, is the authority that state law and the Federal Communications Commission — and therefore, the proposed ordinance — are giving telecom companies to basically install their equipment where and when they want, with little input from the town. Aiman-Smith’s ordinance gives the town as much control as seems possible under state and federal law — but that isn’t much.

Dayton and all other Ohio cities are prohibited by state law from enacting gun-control legislation
Cleveland.com, 8/4/2019

[A]ny change to Ohio’s gun laws would need to come from Columbus. More than a dozen years ago, pro-gun legislators — fueled by the NRA and Buckeye Firearms Association – passed House Bill 347, which prohibited local governments from passing any regulations more restrictive than those passed by the Ohio legislature.

The bill nullified ordinances already in effect in cities such as Cleveland, which had enacted a ban assault weapons. Cleveland passed more gun laws in 2015 — including one that created a firearms registry – but the Ohio’s 8th District Court of Appeals struck down the local laws in 2017.

Philly soda tax: Here’s how much money it has raised, and how it’s been spent
The Philadelphia Inquirer, 8/21/2019

But opposition from the beverage industry is not expected to end, especially as other cities consider or implement taxes on soda. Philadelphia was the first major U.S. city to pass a tax on soda, and other cities are watching how it plays out…

The tax also faces challenges from Harrisburg, where a bill introduced in the state legislature this spring would preempt and eliminate the city’s tax. A similar measure failed to gain enough support to pass last year. The current bill is being pushed by Wakefern Food Corp., a retailer-owned cooperative of grocery stores that includes Jeff Brown’s ShopRite and Fresh Grocer Stores in Philadelphia. [Emphasis added]

According to the Nashville Scene’s Bill Carey, it all began in 1994 when the Tennessee state legislature was passing a series of laws meant to reduce teen smoking. Tobacco industry lobbyists quietly slid in an amendment effectively preventing local governments from passing “any law or regulation of tobacco products.” The tobacco industry wanted preemption law passed so it wouldn’t have to worry about local ordinances popping up all over the state. For example, if the city of Kingsport passed a law regulating the use of tobacco products, the ordinance would violate state law and be invalid. This in essence handicaps all Tennessee municipalities from exercising local control of tobacco products. [Emphasis added]

Cities that have delayed or rejected the technology are hoping they can get around a federal law that preempts local control regarding some elements of telecommunications, including radio frequencies. So far, there have been no legal challenges to local 5G bans, however.

Mayor Sylvester Turner on Wednesday said he wants state lawmakers to give cities and counties more flexibility to address gun violence in response to mass shootings this month that killed 31 people, including 22 in El Paso…

Plastic bags are killing horses and cows across the state
Stephenville Empire-Tribune, 8/14/2019

Last year, the Texas Supreme Court struck down the city of Laredo’s plastic bag ban, effectively ending about a dozen similar policies in other Texas municipalities…

In its ruling, the court said that single-use bags are considered garbage and fall under the state’s solid waste disposal law, which preempts municipal ordinances. [Emphasis added]

Opinions Vary On How Large Wisconsin Livestock Operations Should Be Regulated
WUWM.com, 8/23/2019

Green County resident Bethany Storm thinks the law should rely on local expertise, instead of treating Wisconsin’s varied landscape with one-size-fits-all regulations. “My local county land and water conservation staff know the landscape in Green County,” she said. “They know that 95% of my town sits on karst rock over very little topsoil. They know that barnyards that were built straddling our trout streams have caused problems in the past. Wisconsin needs local control back.” [Emphasis added]

MILWAUKEE (CBS 58) — Milwaukee city leaders say if gun laws don’t change at the state level, they won’t change in the city either…

After a string of mass shootings around the country, Mayor Barrett says he would like to increase gun control, but he can’t.

“Under state law, we are preempted from basically passing any laws that pertain to the city of Milwaukee,” he said. [Emphasis added]