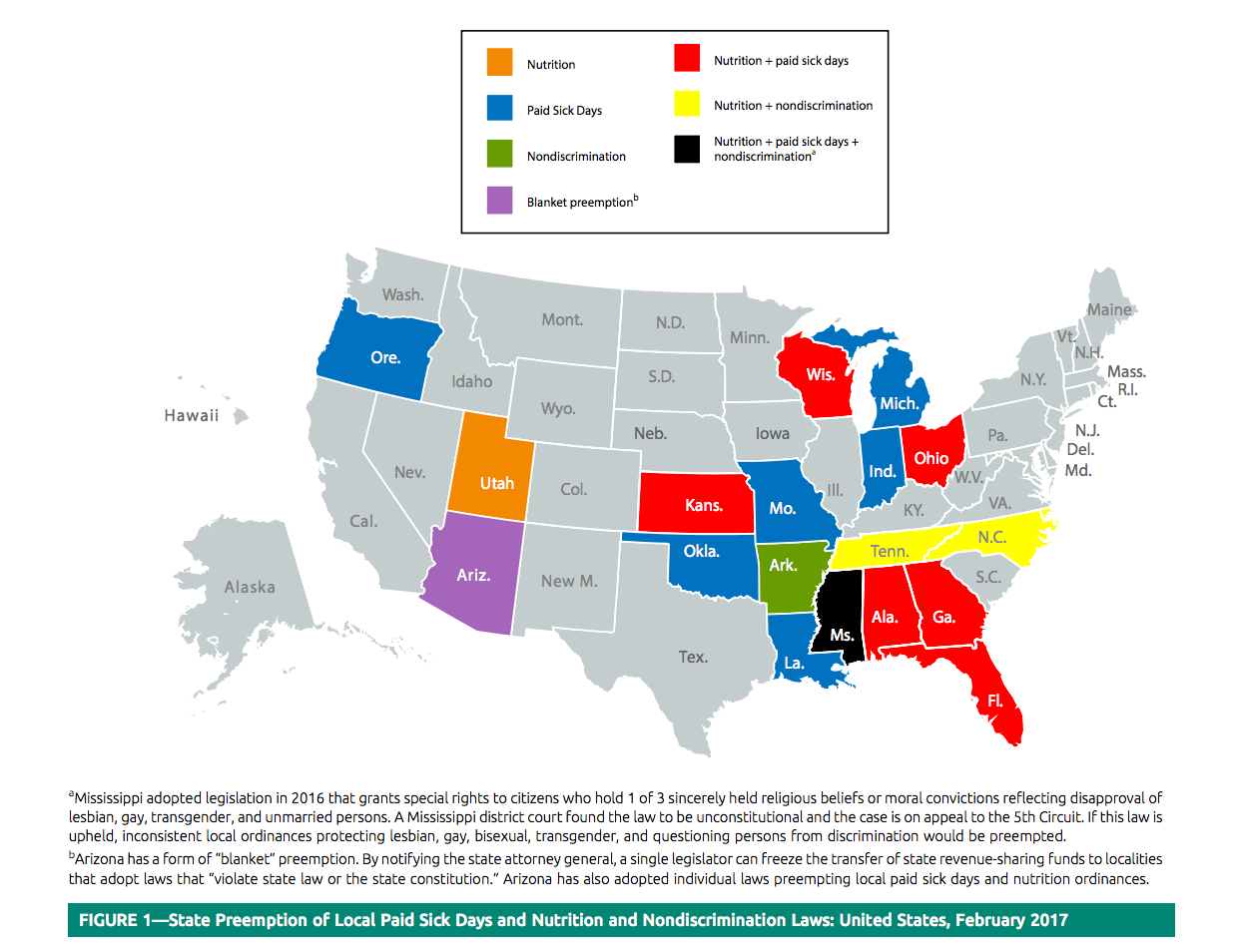 Jennifer Pomeranz, JD, MPH, Department of Public Health Policy and Management, College of Global Public Health, New York University and Mark Pertschuk, JD of Grassroots Change have published this commentary on current trends and the increasing and serious threat of preemption to progress across public health and social justice issues. The commentary was published online in May and will be published in print and online in AJPH in June.

Attorneys general from five states and the District of Columbia are coordinating against President Trump’s push to punish cities that decline to assist federal immigration enforcers.

The six Democrats, led by Eric Schneiderman of New York, have combined on a legal analysis that contends such “sanctuary cities” can limit their involvement in immigration enforcement efforts without flouting federal law.

Attorneys general from California, the District of Columbia, New York, Oregon, Rhode Island and Washington state signed on to the report, which was released Wednesday.

On this week’s Working Lunch podcast, the Align crew tackles big businesses’ request for federal paid leave preemption. Wendy’s, General Mills, Marriott International and almost 400 companies asked Congress to establish a threshold for paid leave. The team at Align evaluates this move, as well as preemption battles in Missouri and other states.

On May 8, 2017, Governor Nathan Deal signed a law expanding the reach of a pre-existing statute that prohibits Georgia localities from passing ordinances affecting worker pay in Georgia. The amendment is in line with a trend of states’ laws proactively limiting counties’ and cities’ abilities to promulgate ordinances that exceed worker protections that state and federal laws provide.

Gov. Eric Holcomb is poised to give rehabilitated criminals the opportunity to apply for state jobs without disclosing prior illegal acts, even as he prohibits local governments from requiring businesses to similarly “ban the box.”

The Republican chief executive has signed into law Senate Enrolled Act 312, which bars localities from adopting ordinances that prevent companies from asking about arrest and criminal history information on employment applications, typically in a box separate from the rest of the form.

The new law, which takes effect July 1, effectively scuttles the 2014 “ban the box” ordinance in place in Indianapolis that’s similar to statutes enacted in 24 other states, including Illinois, and 150 municipalities across the country.

The state House on Wednesday revived the controversial effort to punish cities that have policies considered lenient toward immigrants in the country illegally, after a harsher version of the bill was rejected last week.

A legislative committee has voted unanimously to reject a bill that would have prohibited Maine cities and towns from adopting pesticides restrictions that are more stringent than the state’s.

The controversial proposal from the LePage administration would have invalidated more than two dozen local pesticide ordinances and barred other municipalities from going beyond the state’s pesticide regulations.

Opponents of legislation posed to limit local control of labor ordinances plan to rally Thursday morning at the State Capitol.

The bill, which was passed by both the House and the Senate, aims to create uniform state labor laws and abolishes local labor ordinances that establish some benefits, like paid sick leave and minimum wage.

To recap, the Ordinance was passed in 2015, but a trial judge enjoined its implementation, and the minimum wage was not raised in St. Louis.  However, in 2017, the Missouri Supreme Court reversed the trial court, and the Ordinance went into effect on May 5, 2017.  The Missouri Legislature then stepped in on May 12, 2017 and passed a bill preempting the St. Louis ordinance, and a similar Kansas City ordinance.  Specifically, the bill forbids any political subdivision, which includes any city, from enforcing a current ordinance or enacting a new one relating to the establishment of a minimum wage.  The bill goes to Governor Greitens for his signature; he is expected to sign it.  Because the bill does not have an emergency clause, the earliest it could go into effect is August 28, 2017.

A major gun-rights bill won’t return for more debate this year in the Nebraska Legislature, but the sponsoring senator said he will try again in 2018…

So the senator asked that Legislative Bill 68 be pulled from the agenda, where it was scheduled Monday for second-round debate. The bill will carry over to next session, and Hilgers said he will work to get it through…

The bill would prohibit local governments from passing or enforcing gun ordinances more restrictive than state law. It has strong support of groups such as the National Rifle Association and the Nebraska Firearm Owners Association, in part because it would allow individuals and groups to sue government leaders who try to enforce more restrictive regulations. [Emphasis added in bold.]

… the Big Apple announced Thursday that it plans to enforce the same calorie-labeling laws recently delayed (again) by the Food and Drug Administration.

Starting May 22, the Departments of Health and Consumer Affairs will begin educating businesses during regular inspections in New York. Come August 21, both agencies will take the gloves off and start issuing notices of violation subject to fines for not complying. Chain restaurants and food retailers will have to fork up between $200—$600 in fines.

The National Restaurant Association responded Friday. Not surprisingly, the organization has some concerns with New York’s initiative.

“Just as we feared, city and state governments are taking advantage of the federal menu labeling delay. Federal preemption on menu labeling is the law of the land. The one year delay of implementation does not negate that preemption therefore New York City’s announcement is in violation of federal law,” says Cicely Simpson, executive vice president, National Restaurant Association. [Emphasis added in bold.]

Pittsburgh plans to take its fight for paid sick leave to the Pa. Supreme Court
The Incline, 5/17/2017

The Pennsylvania Commonwealth Court ruled that Pittsburgh does not have the authority to enforce Paid Sick Leave mandates on private employers, and that power resides in the legislature.

Following the passage of Texas’ “sanctuary cities” preemption law that “establishes criminal and civil penalties for local government entities and law enforcement officials that don’t enforce federal immigration laws and detention requests,” some cities, statewide organizations, law enforcement officials and grassroots coalitions are opposing the law. While some county officials have cited concern about the law, the cities of Austin and El Cenizo (near Laredo) are challenging the law in court, Austin officials have support for a “Summer of Resistance.” Protesters in Austin have made it clear that they are unhappy with the new preemption law because, among other things, they believe that local control makes cities and counties safer and healthier.

“The idea that you would threaten law enforcement officers, mayors, and city council people with jail time for not complying with federal regulations, that’s extraordinary in Texas,” says Cal Jillson, an expert in Texas politics at Southern Methodist University, in Dallas.

Amid threats of a special legislative session over the “bathroom bill,” the Texas House on Sunday took a last-minute vote to approve a proposal that would keep transgender students from using school bathrooms that match their gender identity…

“White. Colored. I was living through that era … bathrooms divided us then, and it divides us now,” Democratic state Rep. Senfronia Thompson of Houston, a black woman, told her colleagues. “America has long recognized that separate but equal is not equal at all.”

[The] adopted amendment could override existing trans-inclusive policies at some school districts that allow transgender children to use the bathroom of their choice.

Two years ago, after Texas lawmakers passed House Bill 40 limiting local control over oil and gas activity, activists pledged to form what they called the Texas Grassroots Network to monitor the energy industry and find ways to influence public policy — locally and statewide…

A more active organization may have helped bills like one sponsored by state Rep. Terry Canales that would have allowed cities to prevent a new oil or gas well from being drilled within 1,500 feet of a school or child-care facility. There also was legislation filed by state Sen. Judith Zaffirini, D-Laredo, calling for a similar setback plus a hearing at the Texas Railroad Commission, which regulates the oil and gas industry.

Both bills died without a vote, she said.

Check out our Case Study: Denton Fracking Ban for background on the grassroots movement for local control in Texas and the ongoing movement to restore local authority by repealing state preemption.

Last week, attorneys on behalf of the NRA filed an amicus brief in Kitsap County v. Kitsap Rifle and Revolver Club (Kitsap II), the case which challenges Kitsap County’s firearm discharge ban and range licensing scheme.  Kitsap Rifle and Revolver Club, a local shooting range that has served the Kitsap community for almost 100 years, is at risk of being shut down by the regulations set forth in the Kitsap County anti-gun ordinance.  In the amicus brief, the attorneys establish that Washington state law preempts firearms and shooting range regulations and that the Kitsap County ordinance is in violation of the state’s preemption statutes.