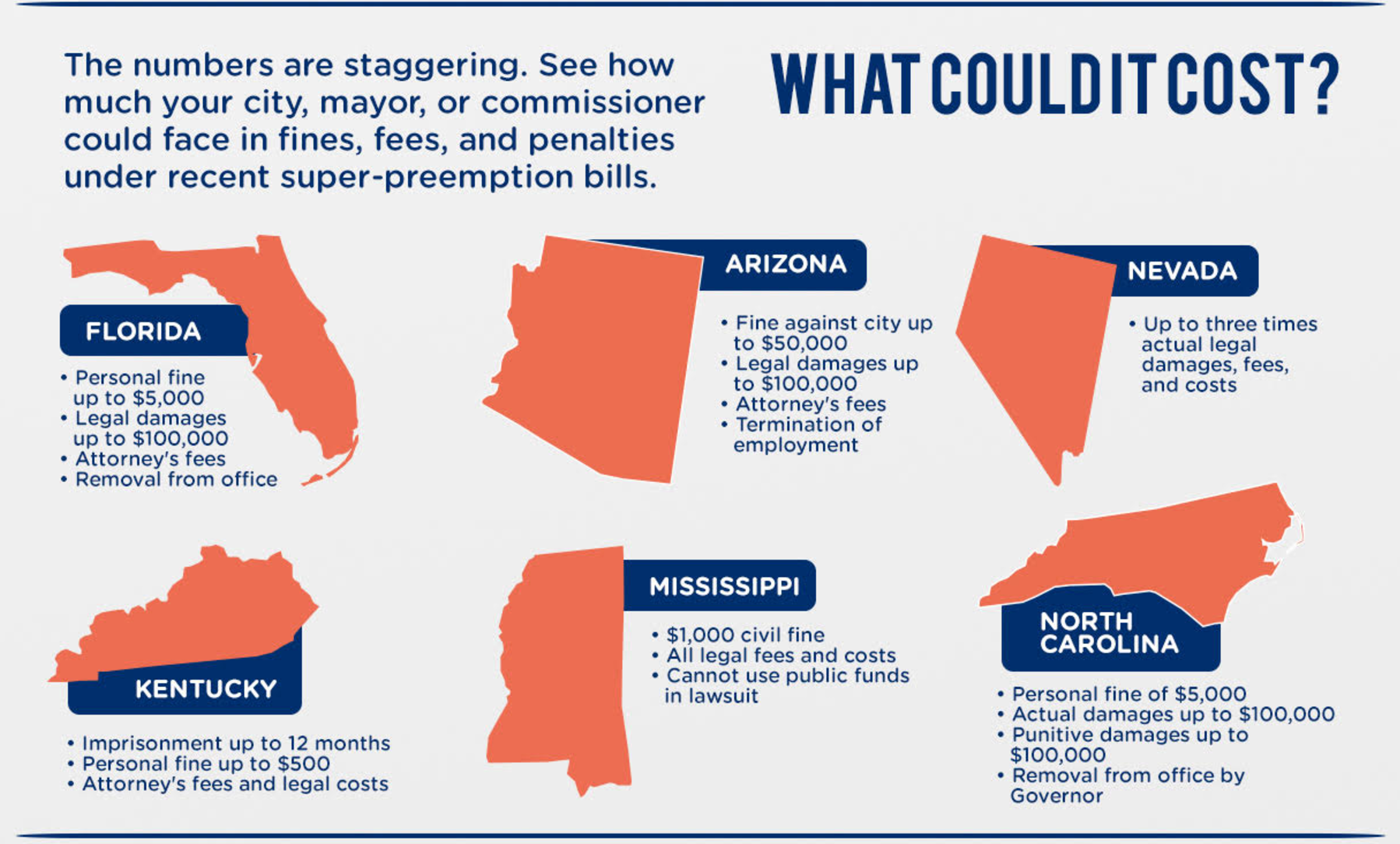 The Campaign to Defend Local Solutions has produced a detailed and well-designed infographic, “The Threat of Super-Preemption,” which explores the growing threat of firearms super-preemption, including statutory standing for pro-gun groups and severe fines and other punishments targeting local officials and agencies, as well as the high costs of super-preemption to local taxpayers.
Businesses Push Back On Paid-Sick-Leave Laws
NPR, 5/6/2017So far, 19 states have legislation that pre-empts local governments from passing their own laws on paid sick leave. (Oregon has a paid-sick-leave law that went into effect last year requiring paid sick time for all but the smallest employers. That law establishes paid sick leave statewide, but it also pre-empts local laws.)…

So Horn says her group, along with other business groups, is helping draft a Republican proposal in the House of Representatives. The terms aren’t finalized, but Horn says the basic idea would be to set a floor for the amount of paid sick leave employers could voluntarily offer. If that minimum threshold is met, she says, the employer would then be exempt from state or local regulations. [emphasis added]

How the Trump Administration Could Pre-Empt State Policies to Shore Up Baseload Power
Green Tech Media, 5/4/2017

This is a long and detailed piece on the potential federal preemption of state and local renewable energy policies by either legislative or regulatory action. Such federal preemption could benefit both the coal and nuclear power industries.

So, theoretically, there are ways for the federal government to use its power to override state-level policies in support of baseload resources. The question comes back to: Why? Are reliability issues facing the U.S. electric grid really approaching emergency status? Or, as some fear, is this a veiled attempt at scaling back states’ renewable energy policies?

… Even in California, the friendliest renewable energy market in the nation, a proposal to mandate 100 percent renewable energy has raised legitimate concerns about overgeneration, grid upgrades and affordability. But that doesn’t mean California and other markets can’t safely get to very high renewable energy penetration levels, or that the federal government must step in to act on a state’s behalf.

Texas isn’t the first state to ban sanctuary cities. And it might not be the last.

More than 80 bills related to so-called sanctuary policies are pending across the country, according to the National Conference of State Legislatures.

A bill that would have allowed crime victims to sue a local government deemed to be sanctuary city died in a Colorado House committee on a party-line vote Wednesday.

Senate Bill 281 also would have prompted the state to withhold tax dollars from those locations deemed by federal authorities to be uncooperative with federal immigration laws.

Under the proposed ban (HB 697), local officials would be fined up to $5,000 for each day the “sanctuary city” policy remains in effect. Also, any county elected official, such as a sheriff, would face suspension or potential removal from office for supporting such policies.

The NRA has reported that LD 351 and LD 9 are still alive in the Maine legislature. LD 351 would allow local governments to ban firearms from municipal public proceedings and polling places, while LD 9 “would prohibit a government agency or political subdivision of Maine from keeping a list or registry of privately owned firearms, or a list or registry of the owners of those firearms.”

Today in the Maine Legislature, the Committee on Energy, Utilities and Technology voted unanimously to stop LD 1516, a bill that would restrict local telecommunications authority. After Tuesday’s compelling testimony, when it was time for a Wednesday vote, LD 1516’s sponsor moved the bill be shelved.

L.D. 1505 is almost identical to a model bill advanced in state houses across the country by a business-backed organization called the American Legislative Exchange Council, or ALEC, and drafted by one of its task forces with corporate members such as pesticide makers CropLife America, Dow AgroSciences and the American Chemistry Council.

For urban lawmakers, there’s a common theme in the Legislature’s budget proposals: messing with Minneapolis and St. Paul
MinnPost, 5/3/2017

With only Democrats representing Minneapolis and St. Paul at the state Capitol, lawmakers from Minnesota’s two largest cities didn’t expect life to be easy under a Republican-controlled Legislature.

And so they’ve been at odds with Republican legislators all session over provisions like pre-emption, which would bar local governments from setting their own policies on issues such as a higher minimum wage, paid sick leave and banning plastic bags in grocery stores.

An interview with an activist seeking to raise the minimum wage in Missouri, which highlights how state preemption has impacted that effort.

HB142 repeals the most controversial aspect of last year’s HB 2, requiring people at a government-run facility to use the public restroom that corresponds to the gender on their birth certificate.

At the same time, it prevents local governments from passing their own non-discrimination policies like the one Charlotte approved in 2016 adding protection based on gender identity — which prompted the conservative legislature to enact HB2 in the first place — until December 2020.

A push to preempt, or take power away from, Ohio cities in the form of a state budget amendment, came in the wake of a Toledo ordinance passed last year that requires most rental properties, about 55,000 units, to be inspected and deemed free from lead hazards before they can be rented. Exposure to lead, especially at a young age, can cause irreversible damage to a developing brain.

A provision in the House Republicans’ budget bill would give the state sole authority on lead abatement activities, which some lead-safe advocates see as an attempt to preempt Toledo’s rental ordinance…

Although Toledo’s law does not require abatement — but rather mandates that affected properties undergo lead-safe inspections, cleaning, and repairs — it’s seen as a possible attempt to usurp or weaken the city’s law, as it voids “any law or rule governing the abatement of lead, lead-based paint, or the employment or licensing of lead abatement professionals.”

By a 134-53 vote, the state House passed an amendment to Title 18 of Pennsylvania’s consolidated statues that would restore a controversial law allowing the National Rifle Association and other membership organizations to sue municipalities in Pennsylvania over local gun ordinances.

State lawmakers in Pennsylvania are moving forward on legislation, HB 1071, that would prohibit any “political subdivision” from imposing a “ban, fee, surcharge or tax” on any type of plastic bag, as reported by StateImpact Pennsylvania.

Municipal officials from Philadelphia, Pittsburgh, York and Erie have all spoken out against the bill and maintain that they should be free to pass their own regulations. One of the bill’s co-sponsors, Rep. Mike Hanna, has a Novolex facility in his district and has expressed concerns about jobs being lost if bag use is restricted.

The NRA reports that the firearms super-preemption bills Senate Bill 445/ House Bill 508, have passed both houses of the Tennessee legislature. “This legislation would create a private cause of action for a party that is adversely affected by a local ordinance, resolution, policy, rule, or other enactment on firearms preempted by state law.”

Texas Gov. Greg Abbott on Sunday signed a bill that would ban sanctuary cities in his state.

The bill, which Abbott could be seen signing on Facebook Live Sunday evening, establishes criminal and civil penalties for local government entities and law enforcement that don’t comply with immigration laws and detention requests, the governor’s office said.

The new measure would fine government entities up to $25,500 for each day the law is violated.

It would also result in a misdemeanor charge for sheriffs, police chiefs and constables who fail to comply with detention requests and in removal from office for elected and appointed officials, Abbott’s office said.

(I)t surprised many that the first to file a suit was Texas Attorney General Ken Paxton.

Paxton is asking a federal court to declare the law constitutional. The lawsuit is against Travis County, Travis County Sheriff Sally Hernandez, Austin Mayor Steve Adler and members of the Austin City Council.

Prayer is a staple of the Texas Capitol, where lawmakers begin each legislative day with an invocation and bowed heads.

But on Wednesday, about 50 faith leaders of various denominations lined the stairs outside the Texas House in protest. Their prayer was silent, but their message was clear: Don’t legislate against LGBT Texans in our name…

Senate Bill 6 would regulate bathroom use in government buildings, public schools and universities based on “biological sex,” keeping transgender Texans from using bathrooms that match their gender identity. It would also prohibit local governments from adopting or enforcing local bathroom regulations.

House Bill 2899 would ban political subdivisions, including school districts, from enacting or enforcing policies to protect a class of persons if they aren’t already protected by federal or state law as applied to bathrooms, showers or changing facilities.

House bathroom bill worse than the original
My San Antonio, 4/28/2017