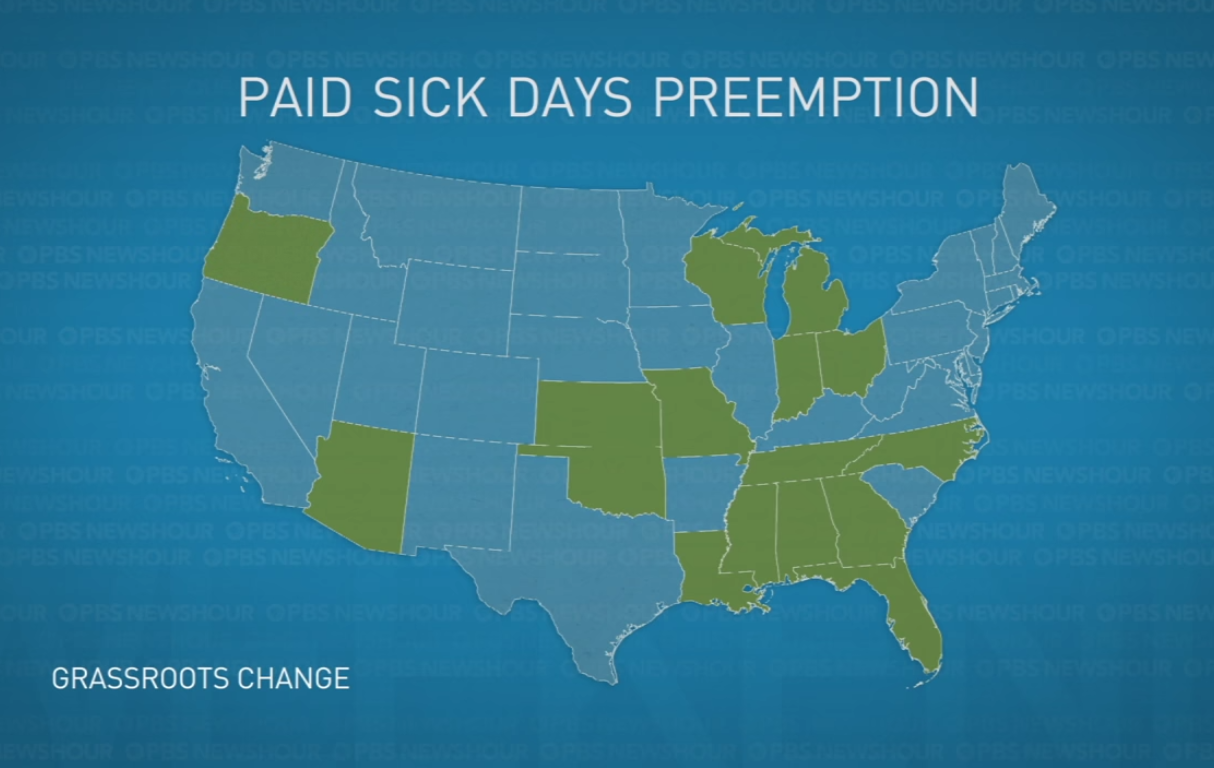 According to Grassroots Change, a national group that tracks preemption,15 Republican-controlled legislatures – and one with a Democratic majority – have adopte 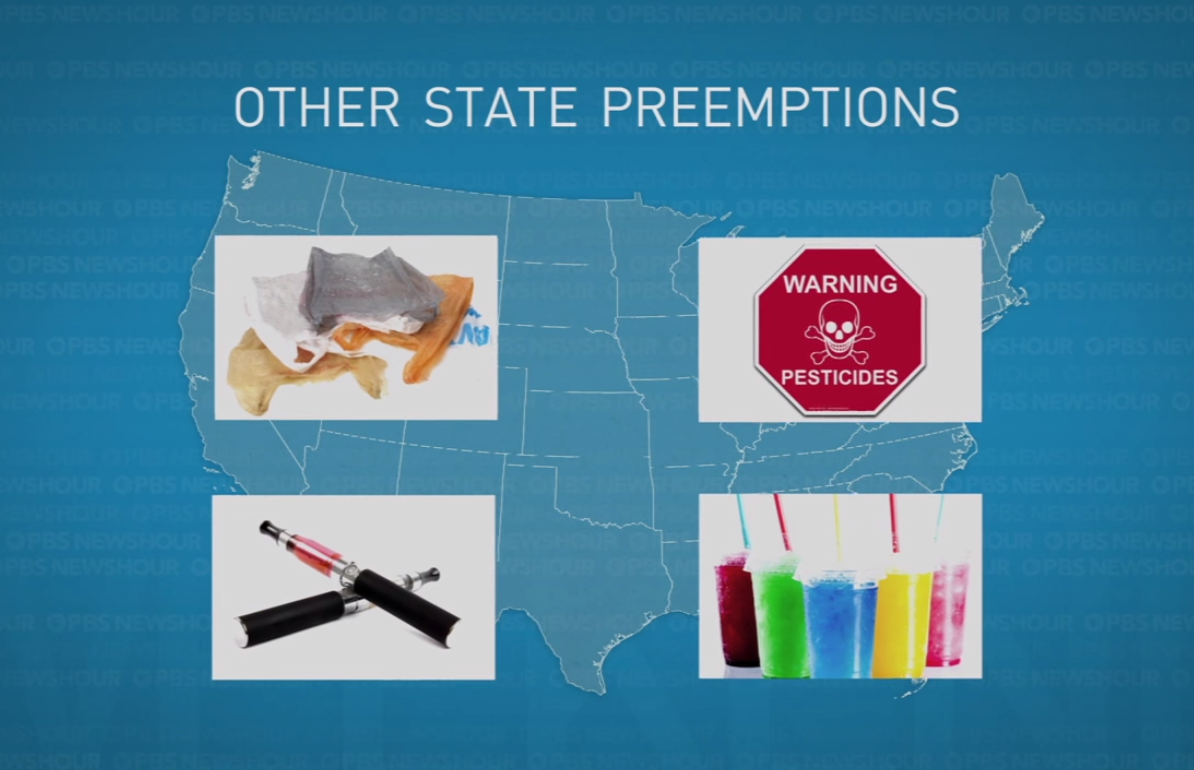 d laws since 2010 that ban local requirements for paid sick days. Milwaukee voters approved a referendum for the benefit in 2008, and in 2011 Wisconsin Governor Scott Walker signed into law a measure that preempts it. Other state preemptions have prevented city regulations on plastic grocery bags, pesticides, e-cigarettes and sugary drinks. – PBS NewsHour

Jennifer Pomeranz, JD, MPH, Department of Public Health Policy and Management, College of Global Public Health, New York University and Mark Pertschuk, JD of Grassroots Change have published this peer-reviewed commentary outlining how current trends in preemption are an increasing and serious threat to progress in public health and safety. The commentary was published online in late April and will be republished in the print and online editions of AJPH in June.

A judge in San Francisco on Tuesday temporarily blocked President Trump’s efforts to starve localities of federal funds when they limit their cooperation with immigration enforcement, a stinging rejection of his threats to make so-called sanctuary cities fall in line.

The judge, William H. Orrick of United States District Court, wrote that the president had overstepped his powers with his January executive order on immigration by tying billions of dollars in federal funding to immigration enforcement. Judge Orrick said only Congress could place such conditions on spending.

The Justice Department ramped up its threat to so-called “sanctuary cities” on Friday: Fork over immigration information on individuals arrested or lose federal funding.

In a series of letters sent to local government officials in major cities around the country, including New York, Chicago, Philadelphia, and Miami, the Justice Department said the jurisdictions have until June 30 to prove compliance with a federal law requiring local authorities to share citizenship or immigrant status of individuals with the Immigration and Naturalization Service if requested or risk losing funds provided in 2016 justice assistance grants.

The forces driving these bills aren’t ordinary citizens but special interests. National groups like the American Legislative Exchange Council allow corporate lobbyists to draft model bills, including laws to bar cities from raising the minimum wage, ignoring the reality that it costs more to live in a city and the minimum wage is dramatically behind the increase in the cost of living. Pre-emption laws strip cities of their ability to reflect the views and values of their constituents and raise questions about the future of representative democracy.

On Wednesday, Arizona Governor Doug Ducey signed a bill that bars cities and towns from mandating sale of so-called “smart guns”—technology that tracks a weapon or stops unauthorized users from firing it…

Anyone found guilty of violating the new law could face a jail sentence of between one year and three years and nine months, according to a fact sheet that accompanied the legislation.

Elected officials will likely have immunity if they violate the law by enacting a smart gun ordinance. But unelected city officials who enforce that ordinance could still be prosecuted, according to Alex Vidal, a legislative associate at the League of Arizona Cities and Towns

The Colorado Senate gave initial approval to a bill that would allow crime victims to sue municipalities with sanctuary city policies, as well the state withholding tax money.

Senate Bill 281 still must pass a roll-call vote before moving to the House, where it faces certain death before the House Democratic majority, which killed a similar bill this session that would have allowed public officials to be arrested over sanctuary city policies.

Local officials who support so-called sanctuary cities could be ousted from office if a person living in the country illegally injures or kills someone in their jurisdiction.

That penalty is under a bill (HB 697) that passed its last committee stop on Monday. It would require local officials to fully comply with federal immigration laws, including holding detainees past their sentences.

Council Bluffs Mayor Matt Walsh said Tuesday he is “concerned” about some provisions of a sweeping firearms bill approved by both houses of the Legislature and signed into law by Gov. Terry Branstad.

Of particular concern is the impact of changes to the wording of the Iowa law that preempts local governments — defined as counties, cities and townships — from restricting or regulating firearms.

The debate over sanctuary cities ultimately drifts into legal territory. And that means there’s disagreement over what exactly a sanctuary city is, or whether it even exists. But for supporters of anti-sanctuary city bills, the issue is pretty simple.

“Make no mistake, these policies and practices have life-and-death consequences, and we’re not just talking about terrorist attacks,” says state Rep. Larry Lockman, a Republican from Amherst.

Lockman is the sponsor of a bill that would compel local governments and law enforcement to act as extensions of federal immigration authorities, to collect and share the immigration status of residents and to assist in the detaining of people who may not have received authorization to be here.

House Bill 2322, which would add “firearm and ammunition components” to the list of preempted topics in Oklahoma’s current state firearms preemption statute, was defeated in the state Senate on April 25. HB 2322 would have extended preemption to all local gun “policies,” not just ordinances.

However, the Oklahoma Municipal League reports that “a new Floor Amendment has been filed for SB 6 in the House making it an omnibus firearm bill including new municipal preemption language.”

A review of the history of Pennsylvania’s firearms preemption laws from a pro-gun perspective, including a failed super-preemption bill in 2014 and the current bill, HB 671.

April 19, the House Judiciary Committee passed House Bill 671 by a 20-5 vote. HB 671 is scheduled to go before the full House for consideration next week.

The bill would prohibit state and local government entities, including law-enforcement agencies, from having any law, policy, practice or custom that impedes law enforcement from communicating or cooperating with a federal immigration agency.

In Texas 2 bills that limit the rights of LGBT people are currently pending in the legislature: