“[I]t is the time of greatest risk to local democracy that has… ever existed”
NBCnews.com national reporter Zach Roth’s new book, The Great Suppression: Voting Rights, Corporate Cash, and the Conservative Assault on Democracy, exposes a national campaign to undermine American democracy using preemption and other tactics.

“In recent years, Republican-led states from Arizona to Florida have declared war on local democracy. Backed by deep-pocketed business interests, they’ve launched a coordinated campaign to push state laws that preempt those passed by cities and counties, undermining efforts to protect the environment and public health, help workers, and combat inequality…

“’I think it is the time of greatest risk to local democracy that has probably ever existed,’ Mark Pertschuk of Grassroots Change, which supports local democracy efforts around the country, told me in reference to the push for preemption. ‘I see it as a fundamental threat.'”

Read an excerpt on NBC.com and purchase the book here.

Case Study: How Denton, Texas Beat the Oil & Gas Industry
Preempted by the state in 2015, the fight for local democracy in Texas lives on 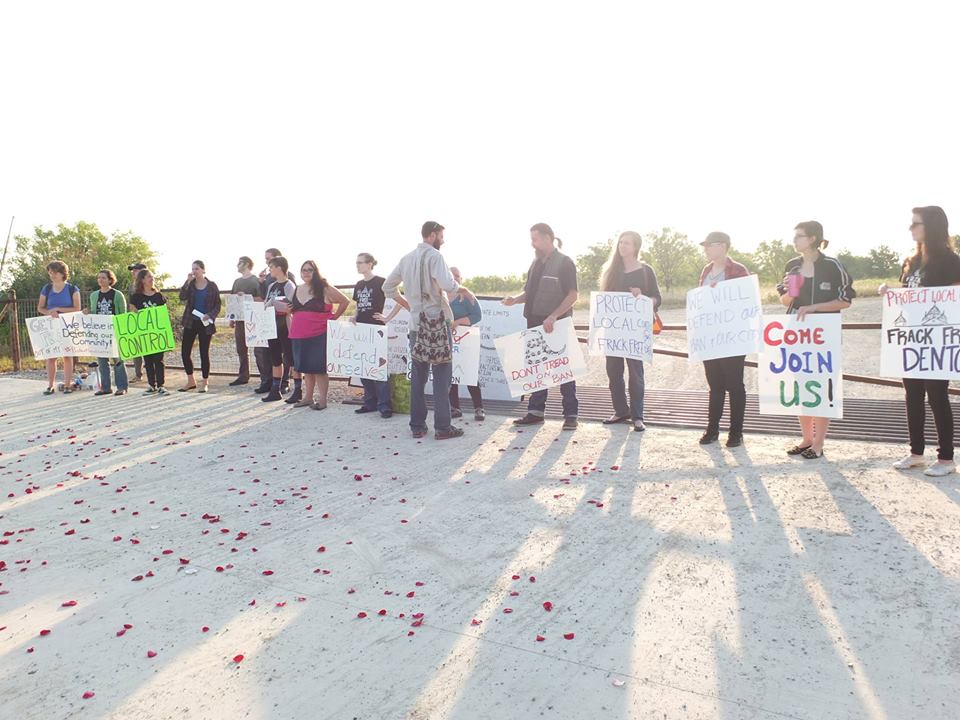 In 2014, voters in Denton, Texas banned fracking in their community. The ballot measure was a hard-fought victory for environmental justice and local democracy. Defeated by a grassroots movement, the oil & gas industry responded by undermining the will of the people with statewide preemption.Today, activists in Denton and across the state continue to fight for local control through civil disobedience and advocacy. Denton’s fracking ban has also inspired communities in Colorado and elsewhere to consider similar bans.See our interactive timeline and case study on Denton’s grassroots movement and the ongoing battle against preemption.

Notably, the new law includes a preemption provision that precludes states from enacting their own labeling requirements for bioengineered foods.  As a consequence, Vermont’s 2014 labeling law, which went into effect on July 1 of this year and would have required labeling of food sold in Vermont that was produced either entirely or partially with genetic engineering, is now preempted by federal law. [emphasis added]

Recently signed into law, the Frank R. Lautenberg Chemical Safety for the 21st Century Act…, significantly reforms the 1976 Toxic Substances Control Act (“TSCA”) and includes important provisions regarding federal preemption of state laws regulating chemicals.  Federal preemption issues related to TSCA reform had been discussed for years, and Senator James Inhofe (R-OK) described the preemption provisions in the Lautenberg Act as “the most contentious issue of the negotiations as well as the most important linchpin in the final deal” this year.

Cities across the nation are finding their efforts to block crude oil shipments by railroad restricted by federal preemption, which prevents local governments from regulating railroad operations and property.

THREE STATES IN A ROW FOR RIGHT TO FARM?
Successful Farming, 7/26/16

This article touches on three recent or pending “right to farm” laws. These laws have been broad enough to preempt virtually all local authority over factory farms, also known as concentrated animal feeding operations, including local zoning authority. The following quote relates to an upcoming ballot measure in Oklahoma:

Opponents, such as former state attorney general Drew Edmondson, say the amendment is so broadly written that it would legalize puppy mills and create a barrier to antipollution laws. “This constitutional amendment is a threat to public water-supply systems both from a quality and quantity perspective,” says Choctaw Mayor Randy Moss, speaking for the Oklahoma Municipal League.

Arizona voters passed a law in 2006 that raised the state minimum wage and gave cities the authority to regulate their own wages and benefits.

In an effort to halt the advance of the oil industry in Colorado, environmental activists said they submitted enough signatures on Monday to place on November’s ballot two initiatives aimed at severely limiting hydraulic fracturing…

One of the Colorado ballot initiatives would establish local control over oil and gas operations, including fracking, while the other would prohibit drilling and fracking in a buffer zone 2,500 feet around occupied buildings, waterways and open public spaces like parks. [emphasis added]

Local oil and gas ordinances in Michigan are being challenged and overturned in court under state preemption.

A proposal to increase the minimum legal age to purchase tobacco products in Ann Arbor from 18 to 21 awaits final approval from the City Council.

The council voted 10-1 Monday night, July 18, to advance the proposed ordinance to a public hearing and possible final approval on Aug. 4.

But does it conflict with state law?

Council Member Jack Eaton, an attorney, argued so as he cast the lone dissenting vote against the proposed ordinance.

Eaton, D-4th Ward, cited Michigan’s Tobacco Products Tax Act of 1993, which states that local governments “shall not impose any new requirement or prohibition pertaining to the sale or licensure of tobacco products for distribution purposes.”

Nebraska agriculture groups meet with the Governor to discuss options to support farming, and express their opposition to a proposed, preemptive state “right to farm” measure.

Oklahoma’s proposed “right to farm” initiative, which would likely limit local as well as state authority over Factory Farms and farming-related issues such as water and air pollution, will remain on the November ballot.

A coalition known as Save the Illinois River, Inc., filed a lawsuit challenging the constitutionality of the proposal in March, more than eight months after Gov. Mary Fallin issued an order placing the matter on the Nov. 8 ballot. In a unanimous ruling, the nine-member court let stand a decision by Oklahoma County District Judge Patricia Parrish in May to dismiss the lawsuit.