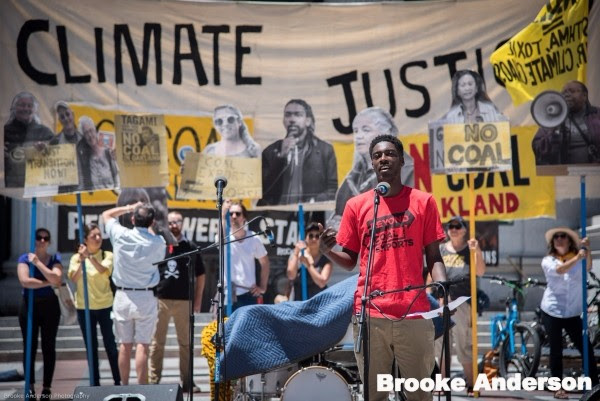 What do the completion of the transcontinental railroad in 1869 and an environmental justice movement in Benicia, California in 2016 have in common? Unfortunately, the answer ispreemption. Adopted in 1862 to promote the expansion of America’s railroad network, the Federal Railroad Act preempted state and local authority over railroad property and operations. That preemption, which probably made sense at the time, has come back to haunt grassroots health and safety movements today.In March 2016, a grassroots movement formed to block a proposed railroad spur in Benicia, CA, in the San Francisco Bay Area. The spur would allow for two 50-car trains a day carrying up to 70,000 barrels of crude oil. The Valero Benicia Refinery is using federal preemption to challenge the Benicia Planning Commission’s decision to deny a permit for the Valero project.

“The platform calls for the full repeal of the Affordable Care Act and for state control of insurance markets. It backs selling insurance across state lines and states that insurance should be more portable so that consumers can move from job to job with the same policy…

“Most likely, there would need to be some sort of pre-emption, such as a statute clarifying what counts as health insurance, even if there are fewer mandates than what’s included in the Affordable Care Act, he said.”

Forget About Vermont!: Congress Passes GMO “Labeling” Legislation
The National Law Review, 7/19/16
On July 14, 2016, the House of Representatives passed S.764 creating a National Bioengineered Food Standard.  Importantly for food manufacturers and distributors, the law – expected to be signed by President Obama – will preempt all state laws “relating to the labeling or disclosure of whether a food is bioengineered or was developed or produced using bioengineering” if that standard is not identical to the mandatory disclosure under the new federal standard.  Once enacted, the law will preempt the Vermont GMO labeling Act that went into effect July 1, 2016.

Obama Ready to Sign Food-Label Bill Consumer Groups Dislike
Bloomberg Politics, 7/13/16
Under the legislation, which has been pushed for by companies including Monsanto Co., Wal-Mart Stores Inc. and groups including the National Corn Growers Association, consumers may still find it hard to figure out if the food they are buying is genetically modified, leading opponents to dub the bill the DARK Act…

State-imposed labeling requirements would be banned and producers that have secured a “certified organic” designation from the U.S. Department of Agriculture would be allowed to clearly display a “non-GMO” label on their products.

At Oral Argument, Ninth Circuit Appeared Poised To Preempt Hawaii ‘GMO’ Ordinances
Forbes, 7/12/16
On June 15, 2016, the U.S. Court of Appeals for the Ninth Circuit heard oral arguments in three related bids to invalidate separate Hawaiian county ordinances.  The counties of Maui and Hawaii ban the cultivation of genetically engineered crops or plants, while Kauai County requires that cultivation of genetically modified organisms (GMOs) be annually disclosed to the county. Opponents allege that the ordinances are preempted by state and federal statutes and regulations governing agriculture and “plant pests.”  Three separate federal district courts found that the ordinances were preempted, causing the counties, or their interested intervenors, to appeal to the Ninth Circuit.

Shooting the moon
Missoula Independent, 7/14/16
Now, on city council, von Lossberg finds himself at the center of a trailblazing effort to do so within city limits. As with any gun policy in America, and especially in Montana, the proposal to expand background checks to private gun sales is bitterly contested…

Montana, like most other states, has a law written specifically to stop local governments from regulating guns. Known as “preemption,” it states that no city, town or other local government body may “prohibit, register, tax, license, or regulate the purchase, sale or other transfer (including delay in purchase, sale, or other transfer), ownership, possession, transportation, use, or unconcealed carrying of any weapon, including a rifle, shotgun, handgun, or concealed handgun.”

Ag leaders ditch Right to Farm measure, say state should focus on tax reform
Lincoln Journal Star, 7/20/16
A coalition of leaders from six Nebraska ag groups on Wednesday came out against amending the state’s constitution to guarantee the “right to farm” and said legislators should be focused on tax reform and specifically reducing property taxes.

Ohio proposal aims to give cities some control over guns
The Lima News, 7/20/16
An Ohio State Senator is promoting legislation that would undo some of the state’s firearms preemption and restore some local control to cities and counties.

Anti-fracking group coming to town
Johnstown Independent, 7/18/16
The Ohio Community Rights Network is fighting ‪fracking in Ohio, a state that currently preempts local control of oil and gas operations, by building a grassroots movement including meetings and public education.

Appeal filed to keep ‘Right to Farm’ off state ballot
Tulsa World, 7/13/16
Opponents of State Question 777 have filed an appeal to try to keep the measure on farming practices off the statewide ballot in November.

Attorneys for opponents of the ballot measure have filed an accelerated appeal in the case, in hopes the Oklahoma Supreme Court will take up the matter before a deadline in late August for the Oklahoma Election Board to print the November ballot, said Heather Hintz, an attorney for plaintiffs in the case.

As discussed in our own blog post (above) a recent US District Court decision found that Shelburne’s attempt to prevent construction of a new rail spur was preempted by federal law. However, the town has taken a new avenue to preventing the proposed project: