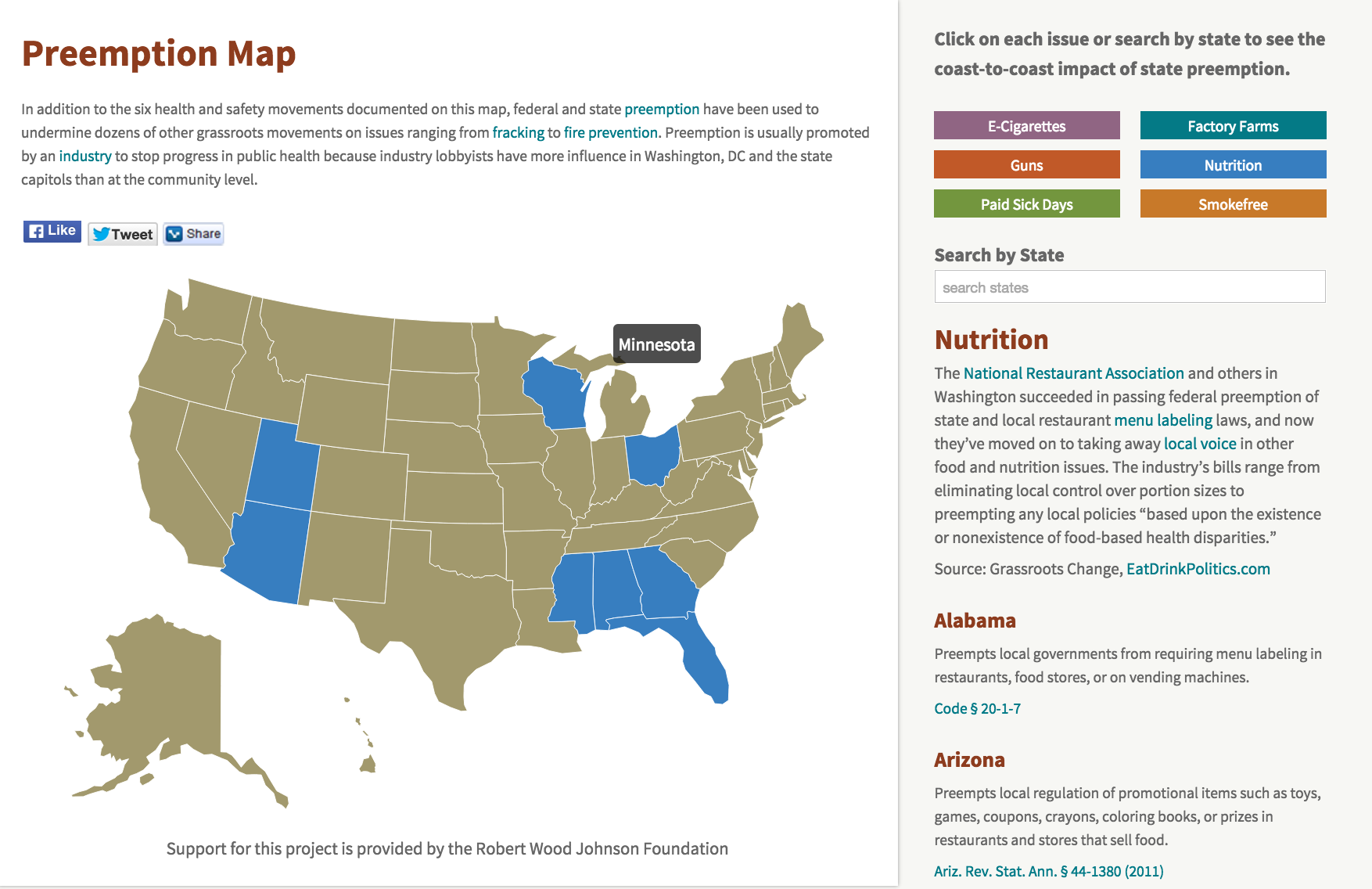 Our state Preemption Map has undergone an update and can now be accessed on tablets! The updated design makes it easier to use and can be viewed on a range of devices, including iPads.

Herbicide finding intensifies battle over GMO labeling
The CT Mirror, 11/9/15
The food and biotech industries are fighting Connecticut’s law and two others in Vermont and Maine with federal legislation that would nullify (preempt is the official term) all three as well as any future attempts at GMO labeling. The bill would also set national standards for labeling food as non-GMO, essentially codifying the existing voluntary practice of labeling those foods.

But GMO labeling advocates now have some new ammunition for a counter-offensive. One of the key reasons for developing GMO crops in the U.S. has been to make them resistant to weed-killers – primarily Monsanto’s herbicide Roundup — which are used to kill weeds and other undesirable plants in and around fields where the food crops are grown…

In March, the International Agency for Research on Cancer (IARC), which is part of the World Health Organization, declared the active ingredient in Roundup – glyphosate – a “probable carcinogen.” Its use is being reviewed by the Environmental Protection Agency, and in September California announced it would begin labeling products with glyphosate as carcinogenic.

Green Chemistry locally grown: are you prepared for New York county Toxic Free Toy Acts?
Lexology, 11/3/15
This blog post addresses the passage of local “Toxic Free Toy Acts” in New York State, covering federal preemption and other topics of concern to the toy industry and other manufacturers and sellers of products for children.

Can localities use ballot power to ban oil and gas drilling?
Lexology, 10/26/15
This post presents an industry perspective supporting preemption of local authority over oil and gas operations.

Bill introduced to remove suppressors from NFA regulation
Guns.com, 10/22/15
According to this pro-gun blog, U.S. Rep. Matt Salmon (R-AZ) is proposing legislation that would remove flash suppressors and firearm silencers from the National Firearms Act (which regulates fully automatic firearms [machine guns]) and would treat them as ordinary firearms, which are largely unregulated at the federal level.

“Since 1934, the federal government has treated devices designed to muffle or suppress the report of firearms as Title II devices that required registration under the National Firearms Registration and Transfer Record and mandated transfers that included a $200 tax stamp. Now, a bill sponsored by U.S. Rep. Matt Salmon, R-Ariz., aims to change that…

“While the bill is short in text, an important provision would allow for federal preemption of suppressor regulation over state laws, which would have the effect of keeping suppressors legal in states whose laws specifically mention that only those registered under the NFA are allowed.” [emphasis added]

Processed Meats Likely to Avoid California Proposition 65 Warning Labels
The National Law Review, 11/2/15
Reuters reports that California is considering adding processed meats (such as hot dogs, ham, and sausages) to its list of cancer-causing products. This comes after the World Health Organization (WHO) classified processed meats as carcinogenic to humans and advised people to moderate consumption of processed meat to reduce the risk of cancer. The WHO based its classification “on sufficient evidence from epidemiological studies that eating processed meat causes colorectal cancer.”…

The meat industry can likely avoid the requirement of a Proposition 65 label on preemption grounds. The Federal Meat Inspection Act of 1906 (FMIA) contains a preemption provision that prohibits states from imposing labeling requirements “in addition to, or different from” the labeling required under FMIA.

Los Angeles Sued Over Gun Magazine Ban
The Washington Free Beacon, 10/27/15
Thirty county sheriffs, gun rights advocates, a peace officer organization, and others have filed a lawsuit challenging the city of Los Angeles’ ban on the possession of magazines capable of holding more than ten rounds.

The lawsuit challenges the ordinance on legal preemption grounds since California state law allows for possession of such magazines.

Pennsylvania
Pennsylvania Federal Court Strikes Down Ordinance Banning Disposal of Wastewater as Unconstitutional
Reed Smith, 10/22/15
In Pennsylvania General Energy Co. L.L.C. v. Grant Township, Magistrate Judge Susan P. Baxter of the United States District Court for the Western District of Pennsylvania, in an unpublished opinion, held that several provisions of an ordinance enacted by Grant Township establishing a “Community Bill of Rights” were invalid or preempted by state law. The ordinance banned corporations from disposing of wastewater from hydraulic fracturing within Grant Township.

Mayors know best, not state officials
The University Star, 10/17/15
Four Texas mayors discuss the need for local control; nondiscrimination ordinances and fracking are two issues discussed in this article, which the Texas legislature has or is attempting to preempt.

Plaintiffs Ask for Summary Judgment in Seattle Gun Tax Case
The Washington Free Beacon, 10/27/15
Plaintiffs in the case against Seattle’s gun sales and ammunition tax have asked the court to issue a summary judgment….

The three leading gun rights organizations said the tax was a violation of both the Constitution and Washington state law.